Remodelers Council is a committee of the Home Builders Association of F-M that deals with issues affecting the remodeling segment of the building industry. It holds meetings every other month for networking, informative sessions and conducting council business. The Council was formed in 1990. It plans and coordinates the Remodeled Home Tour.

Council members regularly lend their efforts to charitable projects and build handicap accessibility ramps. They also constructed bunk beds for the Gladys Ray Shelter in Fargo and assisted with the Home Builders Care Builds with Habitat in 2012 and 2014.

The words of a volunteer say it all: "There is no better feeling than working together as a team to assist someone in need. The look we get, and appreciation expressed by those we help, is priceless," says Terry Lipp, Ferguson Bath, Kitchen & Lighting Showroom. Lipp is a past HBA of F-M Remodelers Council chairman and regularly volunteers to help build wheelchair accessibility ramps for area residents.

"Giving back to the community is personally rewarding and to do this with members of the Council makes it even more special,"he says. "The value we bring by enhancing a person's quality of life and the fact that they are able to stay in their home is extremely gratifying. What other choice would these people have? It is great to know that we do make a difference."

In 2012 and 2014, the Council teamed up with the HBA of F-M and its charity, Home Builders Care of F-M Foundation, to build homes with Lake Agassiz Habitat For Humanity.

As a result of the 2012 build, April Nelson and her children, Brooke and Blake, have settled in and are enjoying the home in north Fargo. The HBA of F-M and Home Builders Care Foundation coordinated the construction of a garage in addition to the house build; Association members donated all labor and materials to make it happen. They also returned last year to construct two handicap-accessible ramps to help Blake who suffers from cerebral palsy.

Last year's build provided a home in south Moorhead to Sonia Greer, a veteran of the armed forces, and her daughter Madison. Construction finished up in October with the HBA topping it off by hosting a house blessing event.

The Council also spearheaded the RENEW Home, a 100-year-old home that was renovated from top to bottom and sold in 2011 to an income-eligible family.

RENEW is an acronym for "restoring existing neighborhoods for everyone's well-being." The Council teamed up with the Home Builders Care of Fargo-Moorhead Foundation and HBA of F-M membership to remodel the home in Fargo. 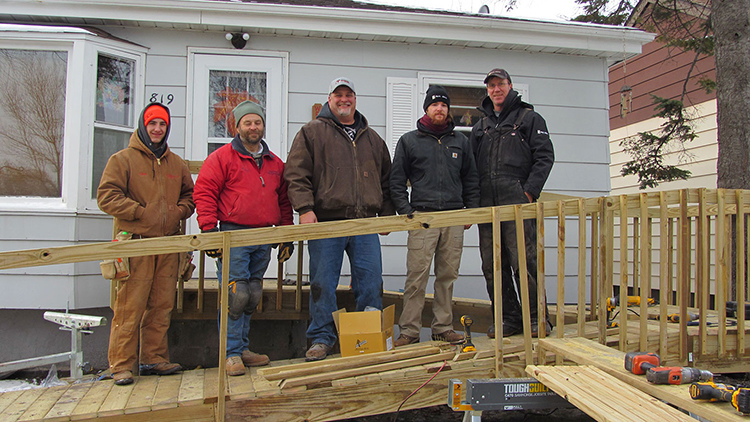